Underpaid Workers Win First-Ever Citywide Union Contract...And New Hope for a Better Life Philadelphia--Coming on the heels of the defeat of the "1%" in November's election, strikes by Wal-Mart workers across the country, and work stoppages by fast food workers in New York City, some 2,500 underpaid security officers in Philadelphia have ratified their first-ever citywide union contract, scoring what could prove to be an important victory in the ongoing national battle for economic fairness. 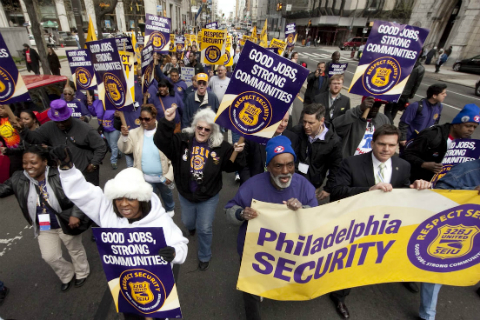 "This contract is more than a bigger paycheck to help us make a better life for our families. It gives us hope and respect," said Ethel Smith, a Philadelphia security officer and mother of two small children. In the largest private-sector organizing win in Philadelphia in two decades, the 2,500 officers--who protect commercial office buildings, universities, hospitals and other institutions--united in 32BJ of the Service Employees International Union earlier this year and began negotiations with Philadelphia's top private security contractors. Under terms of the new contract, effective on January 1, most officers will see their hourly wages increase from between $8 and $11 per hour to between $10.45 and $13 per hour by the contract's expiration in 2016. For the first time, full-time officers will receive employer-paid health care. Officers also won sick days, job security, a uniform allowance, an official channel to solve problems on the job, and the ability to negotiate further improvements in future contracts. A study released by 32BJ-SEIU in July showed the security officers' contract will generate substantial new economic activity in Philadelphia's struggling neighborhoods. With wages as a percent of the economy at an all-time low, the Philadelphia victory may prove to be a harbinger of things to come for both America's 1.1 million security officers and millions of underpaid service workers in other industries.