You might think protecting people is in Anthony Peterson’s DNA—his father was a long-time police officer, one brother was a Federal Officer, another a Vietnam Veteran and his sister-in-law works in law enforcement as well. “It makes family get-togethers really interesting, I’ll say that,” says Peterson 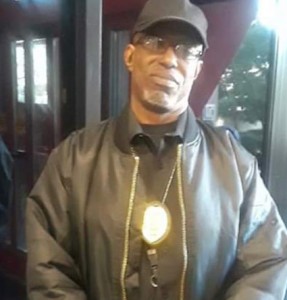 Growing up in Chicago, Peterson joined the Army as a young adult and served as a peace time soldier. It was there he learned a lot about himself and about conquering fear, including how to repel out of helicopters. “The military was challenging. Really difficult, but it taught me a lot of important life lessons I carry with me today,” he says.

The first day out of the Army, Peterson was hired to work as a security officer. And he’s been keeping people and property safe for over 30 years now.

Officer Peterson knows first-hand how important security personnel can be---as a Hurricane Katrina survivor, he worked through the storm helping friends and loved ones get safely to high ground before he was evacuated himself.

Peterson now resides in San Diego, where he lives with his partner and young daughter. He describes San Diego as a beautiful coastal town, close to mountains, lakes and beaches. If you haven’t been to San Diego, it’s an expensive area to reside. For Officer Peterson, he says it’s hard to pay the bills and cover rent on the wages his company pays him.

“Before I moved to San Diego, I was part of a strong security officer union. Our pay was much higher and we had job security. Today, I pay over $2,000 in rent for my family and I’m struggling to make it all work out on what I’m paid,” he says.

The only way Officer Peterson can survive is to work 60 hours or more, every week. But that comes at a price.

“I barely see my 8-year-old. She’s a happy talented kid and I really miss spending time with her. The other day she asked to spend the day with me, and I couldn’t. I had to go to work,” he says.

In his mid-50s, Officer Peterson says he can’t afford to set aside money for his retirement and believes many officers are in the same boat. “I think security companies need to pay $15 per hour, more if you patrol dangerous sites,” he says.

“In my time, I’ve had to deal with a lot of emergencies. I’ve had to perform CPR. The person ended up dying. You can’t shower that off, you take it to heart. I’ve also had two suicides on site. You have to act fast and contact emergency services and secure the area. It’s a hard job,” he says.

Right now, Officer Peterson is forming a union with his co-workers.

“I used to work as a union security officer. I know the difference. With the union, I had protection and job security. I had good pay. Without, the companies won’t back you if it’s not convenient for them,” he says.

“Security is a hard job. An important job. A job that is needed in today’s society. We deserve better.”