San Diego – This week San Diego security officers and community supporters held an energetic rally and press conference at the steps of the County Board of Supervisors to bring awareness to the working conditions they face, including trying to survive on minimum wage. 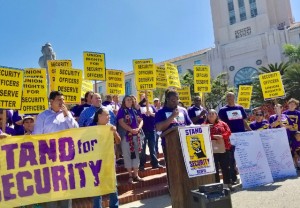 The day began with security officers testifying at the Board meeting about the desperate need to increase pay for area guards and the tough decisions they face living on minimum wage.

Officers referenced a recent San Diego survey which found that more than 60 percent of local guards polled struggle to pay for their housing on the wages they are paid—with more than 48 percent being worried about living conditions, including the possibility of becoming homeless.

According to the National Low-Income Housing Coalition’s annual report, it takes an hourly wage of $25.67 to afford to rent a one-bedroom apartment in California.

However, many officers that work for security contractors throughout San Diego are currently paid the city’s minimum wage of $11.50 per hour, far below the $25.67 laid out in the report.

Don Lewis, a security officer of 16 years had this to say at the press conference — “Recently I had to make a decision no one should have to make – my wife and I had to split up our family because we can’t afford a place big enough to live together on what I'm paid. For months we’ve been trying to save to put a deposit down on an apartment to get our family back together, but it seems impossible. The reality is my family is one step away from being homeless."

Many of these officers called out US Security Associates (USSA) as an example of a low-road security contractor with a lot of workplace issues. USSA is currently contracted by San Diego County and has been subject to a number of lawsuits, including charges of wage theft across the country. In California alone, USSA has settled wage and hour lawsuits in amounts totaling $21 million.

Security Officer Demetrius Thomas also spoke at the event. Officer Thomas was employed with US Security Associates for over two years and during his time protecting County sites, he never received a pay raise above the minimum wage. After paying $200 a month for company-provided healthcare, he says he was left with almost no take-home pay. Officer Thomas currently lives with his daughter because he cannot afford rent on his own.

Right now, more than 1,000 San Diego security officers are joining together to form a union for better pay, benefits, training and to ensure that officers are able to provide for their families.