He became a security officer ten years ago when the Superbowl came to town and they were looking for extra protection. “I love this job and that we provide an important service. We keep everyone safe—the public, athletes, property. It feels good,” he says. 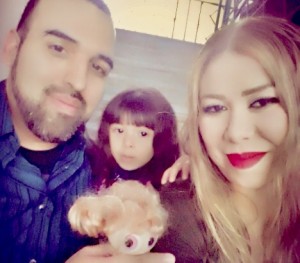 It can be dangerous work at times. With a partner and young child at home, that means something to him. Once, while he was protecting a residential area, there was a situation with drugs and alcohol. Orueta tried to settle things as calmly as he could—but he was threatened, spit at and had items thrown at him. “It gets hairy sometimes,” he says.

Born and raised in San Diego, Orueta and his family had to move to Mexico two years ago. “San Diego is too expensive for what these security companies pay us,” he says. “I couldn’t afford the rent for my family.”

As a result, his commute to his job in San Diego can take up to three hours just to get to work. When you add up his travel time back home, Orueta spends about four hours in his car every work day. “That’s a lot of gas, oil changes and maintenance,” he says.

“It’s not just me, my co-workers are struggling too. So many of us work 2nd jobs, work overtime, and we have to move our families to Mexico—this is just so we can pay our bills, nothing extra,” he says.

Orueta says his family is unable to get the company-provided healthcare, it is too expensive for most guards and they cannot afford it. “When anyone in my family gets sick, we visit the clinics here in TJ. The prices are much better,” he says.

Right now, Orueta is part of a large group of security officers forming a union.

“When we win our union, we can fight for better pay and benefits, and then I can move my family back home to San Diego,” he says. “This commute is a big strain. My kid wants to play when I get home, but I’m too tired. I want that to change. I’m fighting for the union for all of us.”