Robin Morris has been a security officer for 15 years. Born and raised in California, she followed her sister, a corrections officer, into criminal justice work.

When she first started out, getting her bearings in the private security world, she worked graveyard shift. The schedule helped support her three small children at home—aged five, seven and nine years old at the time. “I was the sole supporter and I worked all night long. During the day I attended their school activities. I can tell you, I barely slept those years,” she says. 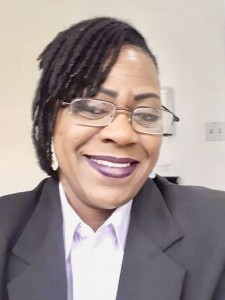 In her time protecting the public, Morris has guarded everything from construction sites to corporate events, concerts and more. “I learned everything I could, CCTV, you name it. I met a lot of people and really enjoyed the job,” she says.

Morris still loves the work, but she wants to make improvements. To do this, she recently joined her co-workers and got involved in the effort to form a union in San Diego.

“What the companies pay us is not adequate for the type of work we do. You got hard working people out day and night, we should be paid what we are worth,” she says.

She describes San Diego as a wonderful city, and expensive too. “Everything costs a lot here. I always have a second job so I can make extra to care for my kids,” Morris says.

She says her current security company offers healthcare, but the monthly payments are too expensive. “You would need three jobs just to cover the monthly medical payments,” she says. Morris says she is lucky. Her ex-husband was in the military and her children are covered under his insurance. “My co-workers are not so fortunate. And they have to go without medical insurance. Watching them go through it, it isn’t fair,” she says.

She talks about the lack of respect in the industry and how companies need to treat officers better. She mentions a horrible experience with a past security employer. Morris got very sick during one of her shifts and had to go directly from work to the hospital. While there, they admitted her to surgery. During this, her security company called and had her car impounded.  “I could not believe they would do that to me, to anyone, while they are in the hospital,” she says.

Morris strongly believes companies need to dedicate more resources to on-site training. “You can’t expect an officer new to a building to know all the ins-and-outs of the post without any training,” she says. She often comes in on her off time to help situate new guards until they feel comfortable. “I know how it feels to be on your own,” she says.

“When they need me, I’m at work, on time, and ready to do what is asked. But a lot of times, we have to stay on these companies to do what they are supposed to,” she says.

With the union, Morris says they can make sure companies train guards and do things the right way.

“I’m a very dominant person. You can’t push me around,” she says. “Security is a male-dominated industry. Ladies, when you feel you are right, you got to speak up for yourself. You got to let people know we mean business.”