LeAndre Aubrey has been a security officer protecting the public for years. It’s what he loves to do. “I draw on my experience growing up in the foster care system. It forced me to meet a lot of different folks and learn how to get along,” he says. “It stuck with me and I’m a real people person.”

Aubrey has a family of his own to care for—his partner, seven-year-old step-son, three-year-old daughter and a baby on the way. And it’s because of his family that he strongly believes the company he works for, First Security Services (FSS), needs to do better by its officers. 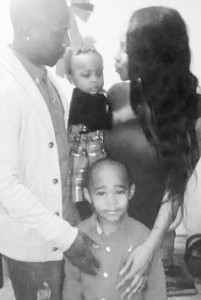 Aubrey feels FSS doesn’t have his best interests at heart. Back in 2015, he was injured on the job protecting his worksite. “The medical bills from that incident are racking up. First Security is hard to communicate with,” he says. “They took forever to send me the workmen’s comp packet and I feel alone on this.”

A few years ago, Officer Aubrey was diagnosed with Type 1 Diabetes and says the medical FSS offers is expensive and doesn’t cover what he needs. If he can come up with a few thousand dollars, he says he could join his partners plan. “I hope I can get covered under my girlfriends’ insurance. I’m on my last few vials of Insulin and I really need that medication. I just wish it wasn’t this hard to survive,” he says.

Aubrey depends on his security job to feed his children, but says that’s tough when the company doesn’t offer any guaranteed pay raises. His current post is at a large public library, but he expresses concerns that if he had to switch sites, he would lose pay. “I feel like I’m at a standstill,” he says.

When Aubrey talks about what it’s like at work for black security officers, he says First Security makes some assumptions. “I think FSS believes African Americans won’t speak up about our rights. And that’s just not true. If I’m not well informed on a particular law, I’ll do my research,” he says. “I want to emphasize for Black History Month that companies like FSS need to appreciate and respect their officers, that means all officers, including African Americans.”

Right now, Aubrey is busy forming a union with his co-workers.

“When we build our union, it will even out the power and improve things. I know I’m doing all this for my family. And I know I’m not the only one with kids out there,” he says. “With our union we can fight for better pay, healthcare, respect and more. Work should work for everyone. Not just the company.”