The more than 800 security officers who guard Amazon headquarters in downtown Seattle are directly employed by Security Industry Specialists (SIS)—a contractor that has come under fire for its treatment of employees. Officers say they haven’t seen a cost of living raise in four years, experience favoritism and lack of clear policies, and most recently, unfair treatment around race and religious practices. Click here to take a second to support these officers. 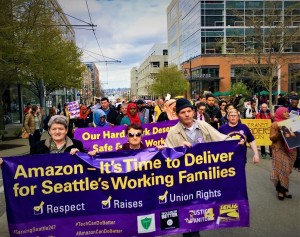 “For me, the worst part is how many women officers have told me they feel they’ve been sexually harassed. My concern is that SIS respect all employees and when they make a complaint, especially one of sexual harassment, it is taken seriously and the company conducts a proper investigation. We need a clear process where women feel safe bringing these issues up and feel they will be respected.  Right now, we don't have that,” said Najma Hareed**, SIS Security Officer.**

On Friday, March 31st, in the latest demonstration, security workers with labor, community supporters and service workers, marched through downtown to demand that Amazon deliver to Seattle’s working families and hold SIS accountable.

In 2015, there was a federal investigation where SIS settled allegations that it interfered with officers’ rights to form a union at Amazon HQ and settled charges with the city of Seattle over complaints of violating the city’s sick time law at the tech campus.

SIS security officers and supporters, including tech workers and religious leaders, have reached out to SIS and Amazon on many occasions to address these concerns--office visits, emails and a petition calling for wage increases and a fair process to unionize signed by over 300 guards. So far, nothing has been addressed.

While the demonstration made its way through Amazon’s sprawling tech campus, a dozen SIS officers paid yet another visit to SIS and Amazon demanding a fair path to form a union--no one from management came out to hear their concerns.