This week, dozens of downtown Detroit security officers, Council Members and community supporters joined together to call for respect, better wages and improved training from the security contractors that employ them. In particular, the rally called out Advance Security/USSA for creating sub-standard working conditions for officers. 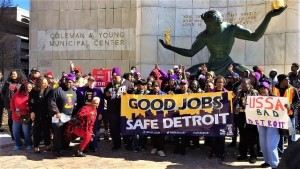 Right now, more than 300 Detroit officers, including those who protect Detroit Medical Center, are seeking a fair path to join SEIU and gain a voice on the job.

“Without union protection, often times security officers are not required and may not have some of the same tools and training for you all to do your job efficiently and effectively. Sometimes you are undervalued and you’re underserved,” Sheffield said. “All of this weakens our local economy and it threatens our public safety.”

The action is part of a larger nationwide Stand For Security movement which seeks to improve conditions in the security industry.