Sabrina Martin is a proud and hard-working security officer living in the Seattle area. She is surrounded by her close knit family--her mother, brother, cousins, sons, daughters-in-law and three grandchildren, including the baby who just turned 7 weeks old. 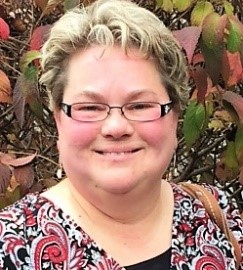 Originally from Massachusetts, Sabrina moved out west in the early 90’s. She worked a manufacturing job as a hydraulic punch and break press operator. It was a great job—solid wages and benefits. But the company took a downturn and many employees were laid off, including Sabrina.

She looked for work where she could. And found a permanent home as a security officer for US Security. She’s going on two years now.

Sabrina enjoys working with the security officers at her site and the truck drivers she sees every day. Her assignment is to process the in and out bound trailers--checking loads, creating reports, and logging every move. It’s a lot of paperwork. And she’s got to make sure things are running smooth and on time.

After two years on the job, Sabrina only makes $10 an hour. “I can’t live on what they pay us. I’m barely surviving,” she says. “To be honest, I have to scrounge for food. Most days I eat a banana and toast because it’s cheap. I really can’t afford more than that.”

She doesn’t have retirement or savings either. The company offers some medical insurance, but she says it isn’t worth the money it would cost to get it. “I really don’t see a way up or out for me,” she says.

Sabrina currently bunks with a friend because she can’t afford rent on her own in Seattle’s high-priced rental market. Someday she thought she might catch up on her bills, but at the wages most security officers are paid, she can’t afford her thyroid medication much less anything else.

The low pay and lack of affordable medical care aren’t the only problems. Sabrina says officers often face unsafe working conditions and don’t have the basic protections to do the job. She recently took a fall down a flight of stairs due to loose mats leading to the security shack--something officers brought up to the company years ago. It was never fixed. She broke her tooth and permanently damaged her knees in that accident.

And there is a lot of employee turnover at her worksite. “Many officers don’t make it through the first day let alone the first week here. I’ve seen officers and supervisors come and go,” she says. This means a lot more work handed to the officers who do stay. And a lot more hours—sometimes 16 to 18 hour shifts to cover vacant posts.

For Sabrina, the lack of respect is the hardest to deal with. “I want to go to work. I want to work hard. And do an excellent job. I’ve always been about that,” she says. But no matter how much sweat officers put in, there are problems. “Management doesn’t treat the people who work here right. They don’t support you. Or back you up,” she says. “Sometimes you hear management calling officers names. One manager called us ‘a bunch of monkeys.’ That isn’t right. Or fair. It just makes our job harder,” she says. “We’re here to protect and keep everyone safe. It’s what we do day in and day out. But no one is protecting us. Things need to change,” Sabrina says.

And it’s why Sabrina is joining many other security officers in Seattle to form a union with SEIU6. “All officers should be paid enough to live. To eat. To take care of their families,” she says. “I am helping build this union because we need respect and better working conditions. Our union is the only way to guarantee our future, and that’s exactly why I’m doing this,” she says.