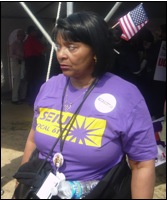 Since forming a union with her coworkers and SEIU Local 615, Cecelia has seen one major change at her workplace. "Everyone is happier," Cecelia says.

It wasn't always that way, says Cecelia, an employee of Securitas at Blue Cross and Blue Shield of Massachusetts. At first, Securitas did not want the union. But now--just over a year after Cecelia helped form a union on the job, the work environment is more positive than ever.

"People are on top of their jobs now," Cecelia says. "We are treated better and with more respect."

Improved wages have a lot do with the new attitude. "Right away I got a $.50 raise with guaranteed raises every 6 months," Cecelia says. "This has been very meaningful to me to have that written in our contract."

Not only do workers benefit from the security officers' union but so does the public. "A union makes buildings safer," Cecilia says. "Someone who makes $15 an hour feels more pride in their job than someone who only makes $7 an hour. You put yourself out there more for the company. When I do security I treat it like it's my house. That's what I always tell new people. When you think of it like that you're always sure not to let people in who aren't supposed to be there."

A 17-year security veteran, Cecelia wants to improve public safety by raising standards for the entire industry. "That's my main concern now," Cecelia says. "When are the rest of the officers going to form unions?"

For those officers who are considering forming a union, Cecelia has some advice. "Make a list of pros and cons," Cecelia says. "Look at what you are getting now and look at what you could get. It's an easy decision if you look at it that way."

And then will come the real payoff--a safer, happier workplace. "It is definitely a better place with a union," Cecelia says.